The next iteration of the Common Agricultural Policy (CAP) is about to be ratified. While those involved have declared it to be “greener and fairer”, there is serious concern that it will be even more destructive for climate and biodiversity. A new report from the GrazeLIFE consortium outlines how and why European policies must provide far more support for low-intensity grazing. 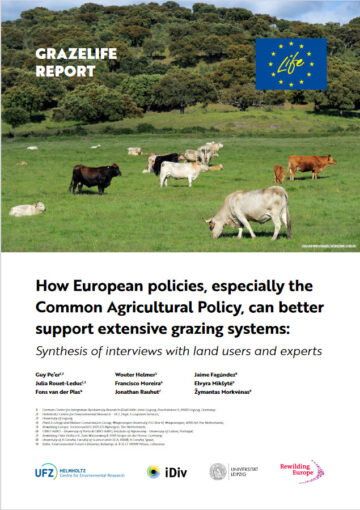 A comprehensive new report, released today by the members of the GrazeLIFE project, outlines how European policies – especially the European Union’s Common Agricultural Policy (CAP) – could better support extensive grazing (where low-density livestock populations feed on natural vegetation). This would guarantee the benefits that such grazing delivers to European citizens, such as enhanced biodiversity, the locking up and storage of carbon, lower wildfire risk, and attractive landscapes that benefit the people connected with them.

The release of the report comes at a critical time, with a new version of the CAP due to be completed and possibly ratified soon. Launched in 1962, the CAP is the EU’s agricultural policy, comprising a complex system of agricultural subsidies and other programmes. The CAP is one of the most influential EU policies (it will account for over 350 billion euros, or around one-third, of the entire 2021-2027 EU budget). While the CAP could serve as a key lever of change for sustainable agriculture, it has so far failed to realise its potential.

The need for natural grazing

Natural grazing, particularly by free-roaming wild herbivores such as European bison, wild horses and deer, is a cornerstone ecological process, delivering a wide range of benefits for European nature and people. This is one of the main reasons why Rewilding Europe is reintroducing or restocking such herbivores in many of its rewilding areas.

Free-roaming grazers can enhance biodiversity by opening up landscapes and preventing encroachment by shrubs. They can act as natural “fire brigades” by removing vegetation that fuels wildfires. And natural grazing can also have a positive impact on carbon storage and climate change resilience.

But populations of large wild herbivores are currently depleted or absent from many European ecosystems. While the ideal solution is to restore these populations through rewilding, domesticated and semi-wild herbivores can perform a somewhat similar role (at least in the interim period), if their density is kept low and they feed on naturally occurring vegetation.

The new CAP: from bad to worse?

While those involved in developing and ratifying the new CAP have declared it to be “greener and fairer”, many are concerned that it will continue to provide insufficient support for more natural and sustainable management practices.

“This week will be critical for the next seven years of land use in Europe,” says GrazeLIFE project manager Wouter Helmer. “With the European Commission, European Parliament and European ministers meeting to determine the fine details of the new CAP, there is a significant risk that it will be even more detrimental than its predecessor for grazing systems that benefit nature and people.”

“This is neither green nor fair. It risks exposing valuable landscapes and restoration efforts, and the people connected with them, to underfunding.”

The new report summarises the outcome of over 60 interviews with land users and experts from eight European countries. These show the CAP to be the single most important factor influencing grazing and the management of large herbivores in the EU.

The new report offers recommendations both for the CAP’s legal texts regarding policy design, and for its subsequent implementation by EU Member States. While the authors raise serious concerns about the current policy and imminent reform, they also stress that the CAP has a broad range of instruments which could be used to better support nature-friendly and sustainable grazing, if Member States use the flexibility they have in implementation effectively.

The report outlines three key areas of concern with the new CAP:

Part of the planned CAP reform involves the introduction of “eco-schemes” – these are designed to support farmers who want to engage in agriculture that benefits climate and biodiversity. But these have some serious shortcomings, including the fact that they are short-term, compete with more established agri-environment measures, and above all, will likely be only available to so-called “farmers and groups of farmers”.

“This means that land users who are not officially farmers are excluded from payments, even if they engage in exactly the same type of management,” explains Guy Pe’er, lead author of the GrazeLIFE report. “This creates a barrier for NGOs and other land users that manage semi-wild cattle herds in natural areas, or who otherwise try to manage the land sustainably. This is neither green nor fair. It risks exposing valuable landscapes and restoration efforts, and the people connected with them, to underfunding.”

All land users should be eligible to apply for eco-schemes, stresses the GrazeLIFE consortium. In addition, such schemes should include measures to specifically support the introduction of extensive grazing by domestic and semi-wild grazers, the reintroduction of wild herbivores, and the restoration of landscape features and habitats.

“We strongly recommend extending the support for grazing management in forests by semi-wild and wild herbivores. We need such herbivores, both for biodiversity and wildfire prevention.

Grazing and herbivory are important not only in grasslands, but also play an essential role in the management and recovery of forests. Results from the GrazeLIFE project have already shown that natural, living forests – complete with naturally occurring populations of free-roaming herbivores – can boost biodiversity and reduce the scale and impact of climate change.

The CAP already provides payments for forest owners, and includes several measures to support afforestation and investments to improve the resilience and environmental value of forest ecosystems. The report highlights the need to stop the exclusion of grazers from forests, and to resolve the confusion between forest and forestry. It also raises concern over the EU Council’s proposal to limit forest-relevant subsidies to the forestry sector. The removal of “other land managers” from the legal text will again exclude NGOs and other land managers from eligibility, with negative impacts on restoration efforts and those carrying them out.

“At a time when everyone is talking about how we should have more trees and more forests to support carbon storage and climate change resilience, the EU Council is proposing a measure that would stop initiatives from allowing natural succession or moving towards natural forest mosaics,” says Guy Pe’er. “We strongly recommend retaining the original text proposed by the Commission, and extending the support for grazing management in forests by semi-wild and wild herbivores. We need such herbivores, both for biodiversity and wildfire prevention.”

One of the key issues discussed in the new GrazeLIFE report is the definition of “grasslands” that are eligible for subsidies, which places a strong emphasis on herbaceous vegetation (i.e. grasses). Yet this definition is easy to misinterpret and often leads to mismanagement.

The GrazeLIFE partners conclude that the definition is not inclusive enough for more heterogeneous grazed habitats, such as scrublands, wetlands, woodlands and wood pastures, and poses implementation challenges in dynamic systems such as wetlands and floodplains.

How this definition impedes sustainable management and leads to the removal of natural vegetation, is clearly illustrated in interviews included in the report. Farmers in the Rhodope Mountains in Bulgaria, for example, state: “The strict requirement to remove all shrubs and bushes from pastures is bad for us. In dry periods our animals graze the grass under the bushes, and in the winter they also eat the leaves and branches. But still they pressure us to remove them”.

The CAP also fails to take into account the dynamics of wetlands and floodplains. Although floodplains are dynamic areas by nature, CAP eligibility criteria effectively exclude marshes and riverbeds (although they are often used by grazers) by sanctioning situations where land use varies over time. As a land user in the Oder Delta explains: “My water buffaloes use reeds for food and resting. But because reedbeds are ineligible as agricultural land under CAP, I have to exclude these parts of my land when I apply for subsidies”.

In the report, the GrazeLIFE consortium welcomes the proposed amendments of the EU Parliament and Council, which extend the definition of grasslands. They suggest that EU and Member State refer to the judgement of the European Court of Justice, which ruled in 2019 that grassland should be classified according to its used, rather than its vegetation.

“When we speak with people about animal welfare and healthy food, people imagine happy animals roaming in rich pastures. These are the kind of landscapes we want to preserve and enhance.”

Details of the reformed CAP will become clearer over the coming weeks. Failure to address the key issues addressed in the report will have a damaging impact on extensive grazing. Grazing that we need more than ever to lock up carbon, enhance biodiversity, and mitigate the impact of climate change.

The new CAP looks set to be little more ambitious than the last one. Yet more flexibility for Member States in its implementation means there is still room for significant improvement. With Member States now moving towards the development of strategic plans, the new report provides many recommendations in this regard.

“There is huge room for improvement if those managing land are given more flexibility to achieve the goals, and if experts, such as ecologists, are better engaged in decision making,” says Wouter Helmer.

“European policies must provide more support to all those engaged in extensive grazing,” he continues. “When we speak with people about animal welfare and healthy food, they imagine happy animals roaming in rich pastures. These are the kind of landscapes we want to preserve and enhance, but the CAP must provide the right tools and backing.”

Living forests can mitigate our climate and biodiversity crises